Authorities have apprehended a suspect in a hit-and-run crash that left a cyclist dead. 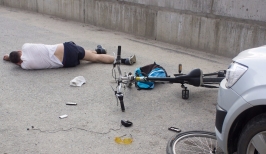 The wreck happened at the intersection of Beach Boulevard and Chapman Avenue. First responders released no information about the accident, other than the fact that the unnamed victim was alive when first responders arrived but was subsequently pronounced dead at a local hospital. Although the suspect initially fled the scene in a champagne-colored Nissan sedan that had sustained considerable front-end damage, authorities believe that they have the tortfeasor (negligent driver) in custody. Investigators spent several hours at the scene gathering evidence.

To improve their health, as a means of commuting, or just to enjoy the outdoors, more people are riding bicycles now than ever before, but that’s only one reason that these fatalities increased 12.2 percent last year to their highest level in over twenty years. Most city plans feature wide-laned streets in tic-tac-toe layouts that quickly move vehicles from one place to another but are not very safe for slower-moving bicycles, and partly due to “bikelash,” many motorists are unwilling to approve significant expenditures for designated bike lanes and other safety improvements. At the same time, there are more distracted drivers than ever before, and people who are only half watching the road as they drive usually do not keep a proper lookout.

In Southern California, bicycle safety is not much of a priority. The 53-page Shared Action Mobility Plan, which is supposed to encapsulate Los Angeles’ vision of transportation’s future, contains only a few paragraphs about bicycle safety.

Myopic street design is no excuse for negligent driving. Tortfeasors cannot blame wide lanes for bicycle-auto accidents any more than they can blame the rain for causing them to lose traction or the sun setting and therefore limiting their visibility. In fact, under the duty of reasonable care, drivers must slow down and otherwise adjust to these adverse conditions in order to safely operate their vehicles. Nearly a hundred years ago, an English judge wrote these words, which are still true today: “You must take reasonable care to avoid acts or omissions which you can reasonably foresee would be likely to injure your neighbour.”

Distraction is one of the most common breaches of the duty of reasonable care. Legally, distracted driving is any activity that causes drivers to take their minds off the road, their eyes off the road, or a hand off the wheel. Other common violations include driving under the influence of drugs and/or alcohol, speeding, and fatigued driving.

The new three-foot law, which requires motorists to give bicyclists at least a three-foot cushion when they are forced to share a traffic lane, when turning, and in certain other situations, may not have done much to improve bicycle safety, but it does make damages easier to prove in court, because of the negligence per se (negligence “as such”) theory. Tortfeasors are liable as a matter of law if they violated a safety statute and caused injury, unless they had a legal excuse for their conduct or some other defense, such as contributory negligence or sudden emergency, applies. In other words, victim/plaintiffs do not have to prove duty or breach in negligence per se cases.

Some people believe that if a hit-and-run tortfeasor is not caught then they cannot recover damages. But in most cases, that’s simply not true. Instead, in these circumstances, most victims can demand compensation from their own insurance companies.

If the tortfeasor is identified, and that is the case in up to 90 percent of these situations, juries often award the victims additional punitive damages. Essentially, if there is clear and convincing evidence that the tortfeasor was dangerously reckless as opposed to merely negligent, the jury can award additional damages to punish the tortfeasor and deter future misconduct.